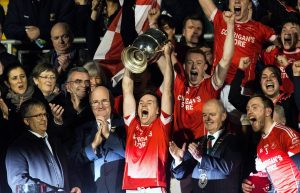 This is a must-win clash for the home side if they are to make the knockout rounds after their narrow loss to Kiltane back in April. The side from Bohola will be delighted to welcome back Brian Reape into their midst after his involvement with the Mayo senior panel. The away side have their own returning star in club talisman Colm Boyle but may struggle against a Moy Davitts team in desperate need of a win with strong home support behind them.

Kiltane would need to pull off a major upset to get a result against a Breaffy side that has a whole host of stars returning from inter-county duty including Matthew Ruane, Robert Hennelly and Aidan and Seamus O’Shea. Beyond that, they also have hard workers like Liam Irwin, who hit 1-5 in last weeks league game against Westport, Conor O’Shea and Robbie Fadden. Kiltane will need big performances from the likes of John Reilly, Tommy Conroy and Mikie Sweeney if they are to make any strides in this tricky away fixture.

The opening weekend of Group 2 produced two draws, so both teams know that they are on the brink of the knockout round with a good result here. A number of key men return for the Stephenites including David Clarke, Ciaran Treacy and Evan Regan. Aghamore will be confident having triumphed in the league clash between the two teams in March and are also boosted with the return of Brendan Harrison and Fergal Boland. It is a close one to call with a lot on the line but home advantage could prove decisive for Ballina here.

When the draw was made for the senior championship, this clash stood out as an enticing one. This west Mayo derby features two sides who know they’ll have to be at their very best to get a result. Mitchels have not been at their usual level of brilliance and needed some magic from Neil Douglas to grind out a draw against Ballina. They will have Paddy Durcan and Donal Vaughan back in their ranks providing experience and skill. Westport will be boosted by the return of Lee Keegan and Fionn McDonagh, the latter whose duel against Paddy Durcan will be one to watch.

The visitors have scoring points for fun in Division 1 this year and recorded a 10-point victory over their hosts back in April in Knockmore. The reigning champions won’t be too worried about that game, now that he has the likes of Cillian and Diarmuid O’Connor back in his ranks. Ballintubber possesses a forward line with massive potential to cause Knockmore problems but they have a few key men of their own to cause havoc, such as Darren McHale, Kevin McLoughlin and Aidan Orme.

This has the potential to be a cracker. A south Mayo derby with the tension of the losing side knowing they are out for the season after both teams suffered defeats in the opening round. Garrymore have more about them form-wise and are currently one point off Knockmore at the top of Division 1. They are a strong, seasoned outfit and can call on names like Trevor Nally, Cathal Slattery and Mark Tierney to make a difference in attack. Holly-Carra struggled against Ballintubber in round 1 and racked up just 1-3 in that game. They will be looking to Darren Coen to carry his form over the summer with the Mayo team into the senior championship.

A huge crowd is expected for this clash between two East Mayo neighbours. Ballagh overcame Claremorris thanks to a late Andy Moran penalty but Charlestown had contrasting fortunes. They lost by a point to Belmullet away, in brutal weather conditions. Both sides possess strong teams and Tom Parsons will be crucial in midfield if he makes his return for Sarsfields. David Drake joins Moran in returning from Mayo duties while Sheroze Akram and Cian Hanley are expected to return from the US in time to play. This game is really too close to call.

It will be a long journey for players, management and supporters of Belmullet GAA as they look to secure their place in the knockout rounds with a game to spare. What stands in their way at the end of the road is a Claremorris team that will be keen to recover from their late defeat to Ballaghaderreen. James McCormack will be available once again and so too will Conor Diskin. Eoin O’Donoghue and Chris Barrett return for the visitors from Mayo duty, adding steel to the spine of their team. Home advantage will be a key factor in this game, with Claremorris in dire need of a win.