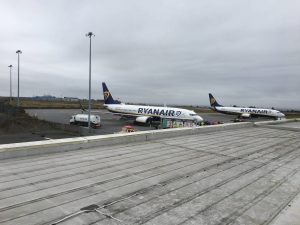 Ireland West Airport Knock has received €17.9 million in direct state funding over the last seven years but the Mayo airport trails behind other regional airports when it comes to funding.

A Department of Transport report reveals that Kerry Airport received the most in capital grants and operating subvention paid out under the €94 million Regional Airports Programme. Since 2012, Kerry Airport has received a total of €37 million in state funding. The next highest recipient was Donegal Airport on €29.5 million.

Ireland West Airport received €19.1 million less than Kerry and €11.6 million less than Donegal. Waterford Airport was bottom of the pile with €9.3m. Waterford Airport has had no commercial flights in two years but still received €750,000 in 2018 and was at the centre of a political storm in June when it was revealed that Minister Shane Ross had sanctioned a joint venture plan with private sector backers to pump €7 million of state and local authority money into the underused airport.

The disparity between Ireland West Airport Knock and other regional airports is bemoaned by local Sinn Féin councillor Gerry Murray.

“It’s tragic really because we all know the potential of Knock Airport. It’s more than disappointing that the airport is not getting the funding it needs and deserves to grow,” Cllr Murray states.

He says major opportunities are not being capitalised on as a result.

“Huge employment opportunities are being lost. If the infrastructure deficit at the airport is address there is no reason why Knock could not double its passenger numbers over a 10-year period.” “There could be and should be 1000 jobs at the airport,” adds Cllr Murray.

The Department of Transport report noted that: “there is relatively little data on passengers using the regional airports.”

“Factors such as origin, destination and journey purpose would be valuable in evaluating the impact of the airports.