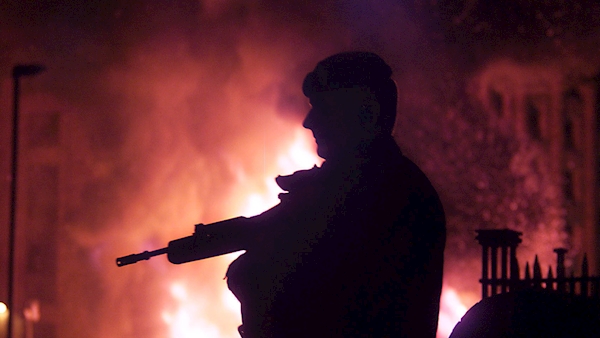 August 14, 2019, marks 50 years since the start of British Army operation in Northern Ireland.

It was the beginning of the lengthiest continuous campaign in British military history.

Northern Ireland’s Government at Stormont had urged the UK to deploy troops after sustained violence wore out police officers.

Soldiers on the streets, at checkpoints or in vehicles on patrol in support of the police provided a ready target for a nascent Provisional IRA pre-eminent amongst the republican factions.

In some parts like South Armagh it became so dangerous that soldiers had to confine much of their travel to helicopter.

Two have died since violence largely ended and the Army was withdrawn from operations in Northern Ireland.

Sappers Patrick Azimkar and Mark Quinsey were shot dead by dissident republicans outside their Massereene base in Co Antrim as they prepared to deploy to Afghanistan.

A Conservative MP and former British Army officer said a republican pub bombing in Co Derry was probably the worst thing to happen in his life.

The Irish National Liberation Army (INLA) detonated a bomb at the Droppin’ Well pub in Ballykelly on December 6, 1982 – killing 17 people, including 11 soldiers and six civilians.

Former Colonel Bob Stewart was incident commander at the scene.

Arriving shortly after the explosion at around 11pm, he said: “I held a girl, who I think was a Catholic, as she died. She had lost both legs and an arm – she was 18.”

Describing the aftermath and taking the bodies away in the wake of the blast, Mr Stewart, 70, said some of them “were just like joints of meat”.

Members of the army have been under investigation for high-profile cases of alleged wrongful killing – Bloody Sunday in Derry is the best-known – leading to calls from some MPs for them to be granted immunity.

On the other side stand the victims of state killings seeking justice for the deaths of loved ones.

A mother-of-eight who had served tea and sandwiches for British soldiers at her family home was shot dead by the Army some 12 months later.

Joan Connolly welcomed soldiers into her home where she lived with her husband and children in a predominately Catholic area in Belfast.

She made them tea and food and soldiers gifted her with a present when the first Regiment stationed in Ballymurphy left that part of west Belfast.

Her daughter, Briege Voyle, has fond memories of the Army being in her home when they first arrived in Northern Ireland.

In August 1971, Joan was one of 10 people shot dead by soldiers in what later became known as the Ballymurphy massacre.

“They just saw everyone as the enemy. They thought every Catholic was an IRA person.”

Martyn McCready said the arrival of British soldiers on the streets of Northern Ireland changed the atmosphere “for the better”.

His father John was shot dead by the IRA as he walked home in north Belfast in 1976.

He said: “They were sent here as a peace force to look after both sides.”