Mayo will be batten down the hatches both on the field and off it tomorrow.

According to meteorological site Yr, 23.1mm of rain is expected to fall in Dublin between the hours of 12pm and 6pm tomorrow.

Temperatures are expected to be in and around 18 degrees celsius for the whole day tomorrow.

It is expected to be heaviest between 3pm and 5pm, with 14.2mm of rain predicted to fall between those hours. With the minor semi-final between Cork and Mayo set to throw-in at 3 pm, that game may yet be a washout.

The rain will die down a bit by 5pm with 4mm expected to fall between 5 and 7pm but the surface of the pitch will likely already be slippery and slick and this could play into Mayo’s hands in the senior game.

This could lead to a harder, more physical game that will likely play into Mayo’s hands if the battle against Donegal is anything to go by.

There have been suggestions that this Dublin team has yet to face a real challenge this year, and what could be a greater challenge than a hungry Mayo team that is not afraid of a fight for possession on a testing playing field.

Mayo has had trials and tribulations in rough weather this season against New York, Roscommon and more recently against Donegal. This seasons acclimatization could stand to them in this fixture.

Supporters traveling to the game are advised to cover up well and to bring jackets and rain gear. 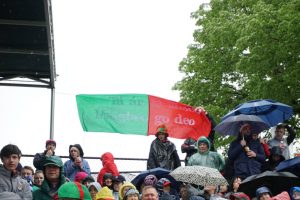 Mayo battled New York in the Bronx rain at the start of the Connacht Championship. Picture: Tony Traglia/Brendan Farrell