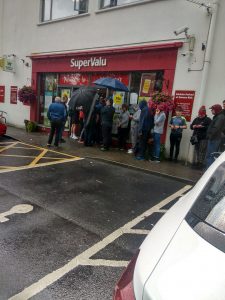 Ticket sales were proceeding without any problems across Mayo today and there was no repeat of these scenes from yesterday when long queues waited in vain in the rain. Picture: Elaine Arthur

It’s now day two in the hunt for tickets to the All-Ireland semi-final between Dublin and Mayo and the chaos of yesterday has died down somewhat… although it appears there are only Hill 16 tickets remaining in shops while there are no tickets at all for purchase online.
Queues for tickets were flooding out the door at participating SuperValu retail outlets across the country yesterday with many customers left frustrated with the time they had to wait, and some missing out on tickets altogether.
However, things have improved this morning.
Damian Hall, a store manager with Kavanagh’s Supervalu in Castlebar said that while tickets are still being sold on a consistent basis, it is nothing compared to yesterday.
Mr Hall said a number of people who were unsuccessful in their hunt for tickets yesterday came back today and got sorted with queues forming as early as 8am.
He indicated that there were no more stand tickets available on the SuperValu system.
At Supervalu Ardnaree, there was no repeat of the large crowds that the Western People reported on yesterday. A steady flow of people was trickling in to get their tickets throughout this morning.
James Wright, a cashier at Supervalu Ardnaree, said that a small crowd had queued up there early this morning and that everyone who came got their tickets successfully. One woman, who waited all day yesterday to no avail, was successful in getting a ticket this morning.
Tickets.ie, meanwhile, was continuing to be a source of frustration this morning. By 10.15,  there was already an online queue of just under 3,000 people, with the queue topping 10,000 by 11:37, at which point a message flashed up on the site reading: “There are no more tickets available at this time.”

There are currently no tickets available on Ticketmaster either. Tickets have been appearing on DoneDeal, with 2 Hill tickets sold last night on the online marketplace at face value.