Wednesday, August 07, 2019
The tickets that were released this morning for the All-Ireland semi-final between Mayo and Dublin are now sold out, according to the GAA.
In a statement on Twitter, the GAA also said that the remaining tickets have been allocated to clubs in the competing counties to be distributed among their members.
Tickets at Supervalu Ardnaree are now sold out, according to a member of staff, with no tickets appearing on their online system since about 1pm. There are still people calling in or phoning to enquire about tickets, however.
Online, queues of up to 10,000 people waited in the digital line on tickets.ie this morning, before tickets became unavailable at 11.37am.
The GAA said that in the event that additional tickets become available, they will be released for sale later in the week.
Mayo GAA board chairman Mike Connolly said all of the clubs got the ticket allocation they ordered, adding that there is likely to be a ticket available for anybody who wants one.
The board said it expects additional tickets to go back on sale later in the week.
Tickets and swap offers are now appearing more frequently on Done Deal but if more are to go on sale, it may be best to remain patient if you have yet to secure a ticket.
Keep an eye out on our website tomorrow as we will have some tickets up for grabs. 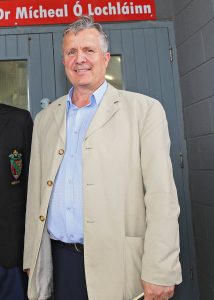 Mike Connelly said all of the Mayo clubs got the allocation they ordered.