Underdogs… but you just never know with this Mayo team

Here they are, this year’s National Football League Division 1 champions, bidding to reach an eighth All-Ireland semi-final in nine seasons, and with home advantage to boot, taking on the Division 2 winners who haven’t reached a semi-final since 2014, and who they have beaten in their two most recent championship meetings, and who they relegated from the League’s top-flight last year. And yet it’s Mayo who are firm underdogs, in the eyes of the bookies at least, to beat Donegal and secure their place in the last four. As Fr Dougal might say, “That’s mad Ted.”

Mad, maybe, yet perfectly justifiable. When the team you’re about to face has just drawn a game against they who seven days earlier beat you by ten points pulling up, and when the team you’re about to face has won all of its four other championship matches this summer whereas you’ve lost two out of seven, including at home to a county that hadn’t beaten you since 2001, it’s only natural there exists some scepticism as to whether Mayo can live to fight another day. James Horan’s team is priced at 13/8 to win in MacHale Park on Saturday. Donegal are 8/13.

The thing about betting odds though is that a bookmaker sets them based on current form. But football matches aren’t won on current form, they’re won on the day. It’s why every conversation had by Mayo supporters about this make-or-break clash is tending to pivot on one word. But.

“On form, you couldn’t back them, but…

“They’re cursed by injuries, but…

“Their home form isn’t great, but…

“They look a very tired team, but…

No one, absolutely no one, seems willing to write off Mayo – and for good reason! Some have done so previously and been made look totally foolish. You see, throughout the past decade, in one-off matches, where there are no second chances, only Dublin — perhaps the greatest team ever to have been assembled — have risen as consistently as Mayo to the challenges that those do-or-die games present. Lo and behold, they’re back in squeaky bum territory.

Next Saturday’s concluding round of the All-Ireland ‘Super 8s’ series is so delicately poised in Group 1 that Kerry join both Mayo and Donegal in requiring something from their final game (against Meath) if wanting to stay in absolute control of their own destiny. Two into three won’t go and the trouble is for Mayo, whereas the other two can afford not to win and still possibly advance, nothing other than a victory will suffice if Mayo are to make certain of their passage into the semi-finals. The year is on a cliff edge. It’s why MacHale Park is going to be electric, if not bulging at the seams due to its dramatically reduced capacity.

“Even to this day, you wake up in the morning and it’s great to have something like that in front of you. It’s just given me a lot of purpose within my own little small world,” said Andy Moran in an interview this week. He wasn’t talking about this upcoming game specifically but more about his undiminished joy in playing for Mayo at the elite level.

“We’re the fifteen to thirty lucky ones who get to put on the jersey and have the chance to represent a county that loves Gaelic football and the team. It’s one of the greatest honours you could ever give to a person.”

Moran’s second-half display against Meath is one of the reasons why Mayo are in a position where everything is still to play for next weekend because it’s far from inconceivable that the Royals could have won that Phase 2 game were it not for his half-timeintroduction. The corner-forward’s guile and experience was key to Mayo overturning a two-points deficit and he who turns 36 next November remains utterly relevant in Mayo’s attempt to stay in the hunt for what, from the outside at least, appears an ever diminishing chance of landing that elusive All-Ireland title.

“There are very few things written about you that you don’t hear. I wouldn’t class myself as being an old person, but I’m an old footballer I suppose — and I’ve been called old for seven years now. But it gets to the point where you actually cannot look at it. I know now I can’t run as far as I once ran and I probably can’t sprint as fast as I once sprinted but I do know that there’s room for an inside-forward that can do something just a tiny bit off-the-cuff and you’re always trying to prove to the manager that I’m good enough to go again next week.

“At the start of the year there’s one big goal, that’s to win the All-Ireland. If its anything else, to me, you shouldn’t be in the squad,” remarked the SuperValu GAA ambassador. He never has been one to shy from repeated questions about Mayo’songoing quest to lift the Sam Maguire.

It’s an interesting thing to hear Andy Moran intimate that he considers 2007 as when came his first real opportunity to make his mark as a Mayo senior footballer, especially since that by then it was already his fifth year in the squad, that he had appeared in both the All-Ireland finals of 2004 and 2006, scored a crucial goal in the ’06 semi against Dublin, and had already racked up a career total of 3-31.

But you can kind of understand where he’s coming from too, since he was used as a late substitute in both those finals, and was the first Mayo player substituted in the Connacht finals of both ’05 and ’06.

In 2007, however, he played every single minute of Mayo’s nine National League matches, including the division 1 final against next Saturday’s opponents, Donegal. And when championship came around he was a mainstay too, starting, finishing and scoring in all three matches against Galway, Cavan and Derry.

“I would say that my mind-set as a player was weak as a younger guy but I always felt that I’d get better as I got older, take my opportunity when it came and that opportunity came in 2007 and I’ve been there or thereabouts since.

“Between 2007 and 2011 I don’t think I missed a game for Mayo at all. And then we went to Compromise Rules training and I broke my leg. And then it was a broken leg and cruciate inside eleven months. And I hurt my back when I came back. So was there a sense of reflection as to my next step after I finish playing? Yes,

And it just so happened that the by-product of that “next step”, opening his own gym in Castlebar, was that it allowed him the time, any hour, any day, to commit to the physical work which has given the 2017 Footballer of the Year such longevity in what, increasingly, has become a young man’s game.

“I always wanted to open my own business and it has really helped me in terms of football but it has also helped in terms of people. You’ve a team of your own that you have to keep happy and make sure that they’re in a good place to deal with the customers coming in. 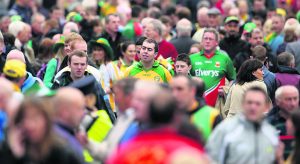 Mayo and Donegal fans streaming into Croke Park ahead of the All-Ireland final between the two sides in 2012. Picture: INPHO/Cathal Noonan