Hoping for some highwire heroics from Mayo

Tuesday, July 30, 2019
The permutations ahead of this Saturday evening’s crutch fixture in MacHale Park have been left so brutally simple as to barely justify being called permutations as all; Mayo must win or their summer is over.

Lose and they are eliminated; draw, and even in the scenario of Kerry losing heavily in Pairc Tailteann, Mayo are eliminated on their head-to-head record against the Kingdom. Topping the group remains a possibility, but that too would require Meath doing a job on Kerry, which seems unlikely given the form of Peter Keane’s side and the fact that Meath are the only team left in Group 1 with precisely nothing bar their pride to play for in Phase 3.

So it’s straight knockout football, like in the old days, but with the nominal benefit to Mayo of playing the game at home in MacHale Park. Nominal, because it’s debatable whether playing at home represents much of an advantage to Mayo these days, given their recent run of form in Castlebar.

As pointed out in these pages last week, Mayo have lost two of their last three championship games in MacHale Park (against Roscommon earlier this year and Galway in 2018) and three of their last eight stretching back to the Connacht championship loss to Galway in 2016. In the meanwhile they have beaten Fermanagh, Kildare, Derry (after extra-time) and Armagh in qualifiers and Sligo in the 2017 Connacht quarter-final: hardly a murderer’s row of opponents, and barely able to hold a candle to the fury Donegal will bring down from the hills this weekend.

This is undoubtedly the biggest game Mayo will have played since the All-Ireland final of 2017. This year’s National League final, the qualifier clash with Galway in Limerick, the Super 8s opener in Killarney: they all had their moments but this is where the rubber really meets the road.

There’s a theory, one not without some merit, that this Mayo team can only fully come to life when the safety-net is taken away, that the adrenaline rush that only comes with high-stakes knockout football will clear the minds and steel the wills enough to see them through.

It’s a comforting thought because taken on the objective form-lines, Donegal are clear favourites here. The Ulster champions are one of just three unbeaten teams left in this year’s championship, along with Dublin and Kerry. Mayo have already been beaten twice.

Donegal have already beaten Tyrone and Cavan and drawn with Kerry, all three of them Division 1 teams in this year’s league. Mayo’s games against Division 1 teams so far this year have seen them lose to Roscommon and Kerry and overcome Galway.

Declan Bonner has effectively purged the remnants of Jim McGuinness’ defensive teachings; so far this year they have already clocked 1-16 against Tyrone, 1-24 against Cavan, 2-19 against Meath and 1-20 against Kerry.

That total of 1-20 in their Phase 2 draw last weekend was the highest-ever tally racked up by a team in an All-Ireland quarter-final, semi-final or final without winning (the same goes for Kerry, obviously).

Do the sums and it works out at Donegal having averaged 23.5 points per game in their last four outings, all of them against teams who have played or will play Division 1 football this year or next year.

Mayo, having played teams like Down and Armagh in the meantime, are averaging 19 points a game over their last five matches since losing to Roscommon, and that figure is bumped up somewhat by late scoring burst against Meath last weekend.

Mayo have at least had the benefit of a weekend off heading into the decisive game after the merciless grind of five games in five weekends, their tour through the back door taking in all four provinces. Theirs has been a relentless schedule – albeit one of their own making – as James Horan noted after the win over Meath, stating that Mayo had been able to do “just maintenance” in their midweek sessions over the five-game stretch.

The weekend off should also give Mayo a chance to bring some of their injured players back to the fold. Keith Higgins will return to contention while Paddy Durcan will also be hopeful of making a return, having missed out on the Kerry and Meath games with a hamstring strain.

Diarmuid O’Connor and Mattie Ruane seem less likely to return, though Horan didn’t explicitly rule out either of the pair when asked about their returns after the Meath game. The likes of Aidan O’Shea and Lee Keegan, who have been struggling with a foot issue and an ankle injury respectively, will also benefit hugely from the extra week of rest.

Donegal endured an injury crisis of their own in the lead-in to the Kerry game, with effectively their entire full-back line ruled out.

Eoghan Bán Gallagher is out for the season with a broken ankle but the experienced duo of Neil McGee and Paddy McGrath – two of the relatively few survivors on the panel from the Donegal team that beat Mayo to win the 2012 All-Ireland final alongside Michael Murphy, Paddy McBrearty, Paul Durcan, Leo McLoone and Frank McGlynn – are expected back in contention for Saturday.

How Mayo deal with Murphy is likely to be crucial. The Glenswilly man has been named at No.14 through this championship season but he has effectively played a roaming role out around the middle third, deploying his exceptional ball-winning ability to secure primary possession and Donegal to transition the ball quickly to McBrearty and Jamie Brennan in the inside line.

Bubbling away beneath the surface is the fascinating subplot of Stephen Rochford facing Mayo for the first time since resigning as manager last autumn. Rochford’s departure was far from smooth and you suspect he will be eager to lay some ghosts to rest and prove a point to some doubters by devising the plan that dumps Mayo out of the championship.

Mayo have already felt the brunt of insider knowledge coming back to bite them in these Super 8s, with Donie Buckley helping Peter Keane devise the tactics that minced Mayo’s kick-out in Killarney two weeks ago. Rochford knows these players as well as anyone and he knows where they can be hurt; there should be a fascinating tactical battle in store.

As has been widely pointed out this week, had someone offered Mayo the chance to play Donegal at home for a place in an All-Ireland semi-final after they lost to Roscommon, they would have taken it and run. They have yet to produce a real 70-minute performance but they remain in with a shout; the hope must be that the familiar taste of high-wire knockout football is enough to bring the best out of them. From this juncture onwards, nothing less will do. 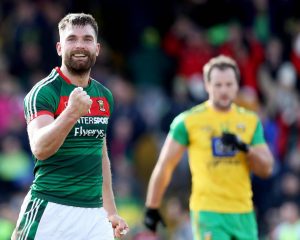 Aidan O’Shea celebrates at the final whistle in MacCumhaill Park, Ballybofey last year when Mayo retained their Division 1 status at the expense of Donegal.