Covies are crushed by goal-hungry Knockmore 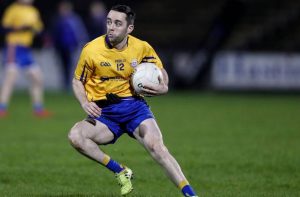 As well as having a telling hand in Knockmore’s opening goal, Keith Ruttledge scored their second as Ray Dempsey’s men eased their way to an 11-point win away to Westport.

The highest-scoring team in Division 1, Knockmore brought their gluttony for goals and points to Westport last Saturday evening and ran rampant over a home side who paid for some sloppy mistakes in their passing game.

Westport also suffered from missing a number of key names in their starting 15, including Lee Keegan, Fionn McDonagh, Niall McManamon and Shane Scott.

They had no real answers against a Knockmore side that moved to the top of the table with this win after Garrymore faltered at home to Ballintubber.

Alan Kennedy responded to Knockmore’s opening point, which came from a Peter Naughton free, with a fine point as he held off his marker but this was the only score Westport could muster in the opening 10 minutes of the tie.

Adam Naughton slotted the ball over from range and then the floodgates opened for Knockmore for the first of many occasions that evening.

Keith Ruttledge attempted a point from a veritable No-Man’s Land about 55 yards from goal and Westport goalkeeper Paddy O’Malley never looked set for the dropping ball and the ensuing scramble between himself and Connell Dempsey went the way of the Knockmore half-forward, as he latched onto the ball to finish.

A second goal in quick succession followed for Knockmore. This time it came as a result of O’Malley’s short kickout going awry. The ball flew straight into the hands of Keith Ruttledge and he rounded O’Malley to tap into an empty net.

This scoring spree was rounded off by Peter Naughton adding yet another free to his tally and with less than 10 minutes gone, Westport already looked in dire straits.

Luck turned their way somewhat just moments later and they began to take chunks out of the gap that had formed between the two sides. Pat Lambert smartly passed across the face of goal, away from the reach of former Mayo forward turned ’keeper Aidan Kilcoyne, and Brian McDermott had the easy task of palming the ball into the net.

Alan Kennedy followed this up with a cracker of a point as he turned his marker and fired a left-footed rocket over the bar.

Knockmore stretched their lead back to five points with a free from Peter Naughton but Westport continued to eat into the away side’s advantage through a point from Eoghan McLaughlin and a free from Cillian Kilkelly.

The sides then exchanged points back and forth for the remainder of the first half with Aidan Orme, Keith Rutledge and Darren McHale grabbing points for Knockmore to respond to efforts from Paul Lambert and Ronan Geraghty, bringing the game to half-time with a score-line of 1-6 to 2-7, with Knockmore leading.

Darren McHale sprang to life at the beginning of the second half and grabbed two points in quick succession for the visitors, the second a fisted score from close range. Cillian Kilkelly then got Westport back up and running with an absolutely marvellous point from an astounding distance.

But Westport missed a golden opportunity to bring themselves to within two points of Knockmore when Jimmy Walsh played an inch-perfect pass to Brian McDermott. McDermott turned and fired at goal but Kilcoyne made a miraculous save to keep the Covies at bay.

The home side was

then dealt further misery. Tom Clarke dashed through the Westport defence, a racing blur of saffron and blue beating three defenders before cooling slotting into the net.

Back to back frees from Alan Kennedy coming five minutes apart from each other were not helping Westport in the grand scheme and they looked to be sinking.

Knockmore continued to rattle Westport with points from Orme and Keith Ruttledge. Paddy O’Malley made his way up from goal to score a ‘45’ for the hosts but they were about to be dealt one last blow from their free-scoring visitors as Darren McHale capped off a fine half with a goal. He beat O’Malley in a footrace and palmed the ball with both hands past the onrushing ’keeper.

A final point from Peter Naughton, this time from play, capped off a brilliant evening out in Westport for Knockmore who now have an enticing trip to Claremorris to look forward to next month. Westport, meanwhile, will look to recover on the road against Breaffy.