Mayo minors prepare for their next challenge

Fresh off the back of winning their first Connacht title since 2014, and their first-ever in the competition’s new under-17 guise, the Mayo minors will this weekend go in search of a place in the last four of the All-Ireland series when they take on Dublin in a quarter-final clash in Longford.

Mayo claimed the Kilcoyne Cup for the first time in five seasons with a thrilling extra-time win over Galway in the Connacht final in Tuam two weekends ago, overturning a four-point extra-time deficit to win out by 1-18 to 1-17, with Frank Irwin’s late converted penalty proving the decisive moment of an enthralling game.

The Mayo players were rightly jubilant after their provincial triumph but as manager Tomas Morley told the Western People this week, the task on his hands since the Connacht final and ahead of the meeting with Dublin is re-gearing his players’ minds toward the task of competing and progressing in the All-Ireland series. To that end, the squad went on a team-building trip to Achill Island last weekend to plan and prepare for the next step in the journey.

“It’s getting everyone back down to earth really that’s the challenge,” said Morley. “As much as it was our intention at the start of the year to win Connacht, the prize is there for them now. It is quite difficult to get young fellas back on track in that sense, because there’s more to do here.

“But the way this year has gone has gone has probably matured them a lot. It might be harder to get them back on track if they had won every game, but the fact that we lost a few makes it that bit easier.”

Mayo lost two games in the Connacht championship round-robin; they were beaten by both Sligo and Galway and were indebted to results elsewhere to make the play-offs, wherein they overcame those same two teams to take the title and turn their eyes to the All-Ireland series.

“I think they’re ready for it. They can see that there’s nothing stopping them from continuing on bar themselves,” continued Morley.

Mayo have already played and beaten Dublin twice this year in preseason challenge games, the first in Dublin and the second in Longford, though their winning margins were no more than a couple of points on either occasion.

Dublin lost the Leinster final to Kildare the day after Mayo’s win, pushing the Lilywhites to extra-time but eventually falling short by 2-21 to 1-19.

“Dublin are a good team,” offered Morley, who was in Navan’s Pairc Tailteann for the Leinster final. “We have some experience with them but from what I saw the last day (in Navan), I didn’t recognize too many that were there when we played them.

Mayo will head into the quarter-final with a relatively clean bill of health. Sam Callinan has been out of action since the Connacht Round 3 loss to Sligo with a stress fracture in his foot but he will undergo a review this week to assess his fitness for Dublin. Alfie Morrison was a late withdrawal from the Connacht final squad but he too will take a fitness test this week and should be in contention.

The Dublin match will be Mayo’s seventh championship game of the campaign. One of the motives behind restructuring the minor championships was to provide more games for young players than the old ‘one-and-done’ format allowed, and in that respect Morley and his selectors have been able to see their players grow and improve in front of their own eyes.

“As long as the year is, you’re still finding out new things,” he said.

“If we’re in the business of making the senior players of the future, that’s something that’s going to stand to them. The other thing that I don’t think people fully realize is that guys are developing physically and mentally as we have them.

“We want to get across to people just how young this age grade is. You see guys sometimes, even at senior matches, and you mightn’t have seen them in three or fours years but you still have a fair idea of what they can actually give. They can always get better but in some ways they’re set into the patterns in which they play.

“But our guys can completely change. It can just be a physical thing, but more often it’s a mixture of the mental side of it, the skill side and the physical side,” he continued.

Development as a fairly broad concept can cover all manner of sins when we talk about underage football; producing players for the future is a noble aim but sport can be fickle and the demand for immediate results is is ever-present. It’s a balance that Morley is keenly aware of striking.

“If you don’t win, people think it’s a cop-out to talk about player development,” he offered. “We’re under the academy structures but it’s definitely to win that we’re involved in it. There is that balance to find.

Morley and his back-room team are also mindful of the fact that these are 16 and 17-year-olds they’re dealing with, young men often dealing their own stresses on top of playing for their county. To that end, the back-room team includes a life-coach whose role it is to help players with issues away from the football field.

“There are things that go on with lads’ mental health, even just the normal pressures of teenage stuff. I’m a psychotherapist myself but you can’t start dong psychotherapy with them, so we decided on a life-coach. We’re not delving into their home lives or anything but there is a phone call to most guys if not a Skype every week,” said Morley.

“There’s a difference between training for fitness and training for mental fitness. In the old days, you did some really hard stuff, and that was as much for mental toughness as it was for physical. That’s sort of gone out of it now, and you don’t know sometimes with this age group whether they have that in them unless you see it in the white heat of a match. That’s why the last day was so pleasing, because they showed that.

“There’s a lot going on in Mayo football right now. We’re in the academy structure but we’re at the top end of it. The fact that we win means people think things are very good, but even if we had lost, things are still going in the right direction. It can be hard for people to understand it that way,” he continued. 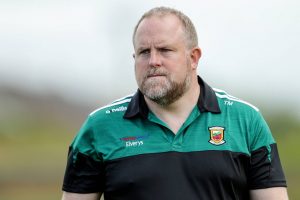