The star of Mayo’s last All-Ireland winning senior football team – and the man
who became known to a generation as ‘The Flying Doctor’ – has passed away in
California after a brief illness.
Swinford-born Dr Padraig Carney was aged 91 and had lived in California for
almost his entire adult life, having emigrated to New York in 1954 at the height
of his Gaelic football stardom. By then, Carney had won everything the game had 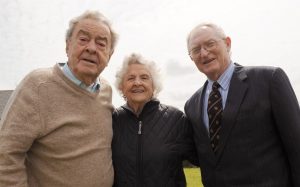 Padraig Carney (on right) and his wife Myra with his Mayo team-mate Fr Peter Quinn on a visit to Ireland in the summer of 2011. Picture: David Farrell Photography

to offer including two All-Ireland senior titles, National League, Railway Cup,
Sigerson Cup and four Connacht titles. In 1954, Carney returned from America
on two occasions to captain Mayo in the National Football League semi-final and
final. His star-studded career ended when he was still only 25.
Carney also achieved huge success off the field and was a renowned
gynecologist and obstetrician in California where he and his wife Myra settled
and raised a family of four. One of his sons, Cormac, is a judge in California.
Those who saw Padraig Carney in the Green and Red say he was the greatest
footballer to ever don the county jersey: an all-action, dynamic, inspirational
midfielder whose finest hour was the All-Ireland Final in 1951 when he
delivered a Man of the Match performance as Mayo defeated a highly-fancied
Meath side.
Mr Carney was predeceased by his wife Myra and is survived by his three sons, Brian,
Terence and Cormac; daughter Sheila and extended family.