A week earlier than she had been expected to box, Kelsey Langan made light of the change in schedule to be crowned champion of Ireland on Friday when winning the 39kg Girl 1 final at the National Stadium in Dublin.

The Knockmore/Foxford BC pugilist beat Paulstown’s Jessica Brennan with the referee stopping the contest in Round 2.

Kelsey had won her semi-final two weeks earlier, defeating her Belfast opponent on a convincing 5-0 score-line, but she wasn’t due to meet her Kilkenny opponent in the final until next Friday night. However, a request from the renowned Paulstown club for a change in dates due to a long-standing family commitment on the part of their fighter, was obliged by Knockmore/Foxford.

That denied Kelsey Langan the atmosphere of a packed National Stadium on finals night, but her club rallied to bring a busload of supporters to create their own special atmosphere at the venue.Langan might have been as cool as a breeze leading up to the final but as soon as the opening bell sounded, she immediately hit top gear. Inside the first minute, she gave her opponent a standing count and from then on it was only a matter of when the bout would be stopped.

It was midway through round two when she caught the Paulstown boxer with some strong head blows and the referee stepped in to bring the contest to a halt, sparking scenes of wild celebrations among the Mayo contingent.

Kelsey Langan has become only the fourth boxer in the 10-year existence of Knockmore/Foxford BC to win a national title. The club total is actually five after a double success for Eric Nash. The club is especially delighted as they have progressed through the full season without any boxing ring assembled for sparring. However, the KFC committee are confident that a positive announcement will be made in the near future concerning the future of the club.

Meanwhile, there will be Mayo interest on finals night this Friday as Kelly Stevens from Charlestown BC takes on Togher’s Chelsea O’Driscoll in the 27kg Girl 1 final whilst Katie Heraty of St Anne’s, Westport is up against Dunboyne’s Tegan Farrelly at 35kg. At the same weight but in the Girl 2 division, Carlagh Mullarney of Ballyhaunis faces Nicole Kinsella of St Mary’s. Another Ballyhaunis boxer, Grace Moran, is already crowned 77kg Girl 1 champion by virtue of a final walkover. The first bout is at 6.30pm. 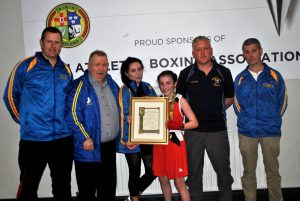