No excuses from Walsh as he quickly looks to next challenge

It wasn’t the start to the Nicky Rackard Cup campaign that Derek Walsh and his players would have hoped for, or expected, in Omagh yesterday, as the visiting Mayo lost out by 1-15 to 0-15 to Tyrone in the first round of their championship season.

Mayo came into the game on the back of a good showing in their Division 2A National League campaign and were heavily fancied to get the better of the Division 3A-dwelling Tyrone. But they struggled from the off to match the Red Hand’s intensity and execution and ultimately fell to a painful defeat.

“We’re very disappointed,” stated Walsh after the game. “But look, Tyrone were the better team today and we can have no arguments. We didn’t show up. Preparation went well and everything but we just didn’t show up. Tyrone deserved it.

“We’re still in the competition, we have two more games to go. But we have a lot of improvement to do. It’s a wake-up call for us. We didn’t travel well, obviously. From the start of the game we were off it a bit and Tyrone started well. We struggled through the whole game to get on top of them and we didn’t eventually and Tyrone deserved to win it,” he continued.

Damian Casey landed 1-12 for the home side in a devastating performance and Walsh acknowledged that the Eoghan Rua clubman had been too much for his defenders to handle.

“Tyrone are a very good team, we knew that coming up. They have some brilliant hurlers and Damian is as good a hurler as there is in the country. Hopefully, 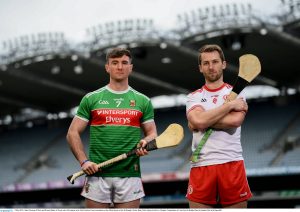 Mayo’s Cathal Freeman was joined by Dermot Begley of Tyrone at last Thursday’s official launch of the 2019 Nicky Rackard Cup which was held in Croke Park. The teams met in Round 1 at the weekend where the Red Hands got the better of Mayo who had begun as overall favourites for the title.

we’ll get to meet them again further down the road,” he offered.

Mayo were the architects of their own downfall in many ways; they struck ten wides in the first half, eight in the second, many of them at key junctures in the game when Tyrone were showing signs of vulnerability.

“Eighteen wides is a lot,” agreed Walsh. “Look, we have plenty to work on before Saturday along with the shooting. We’re very disappointed but Tyrone deserved to win it today, they were the better team.

“We’re looking forward to Louth now. We have a lot of work to do this week to build the lads up again and get the confidence back up. But we’re still in the competition,” he said, looking ahead to what is now a must-win meeting with the Wee County in Castlebar this Saturday evening at 3pm.

Asked what in particular he and his management team will want to work on this week, Walsh said there are several areas in need of improvement.

“Our discipline wasn’t what we might have wanted, although some of the decisions I thought were harsh enough. We gave away eight frees in the first half against their two.”

Walsh was cautiously optimistic that some of Mayo’s injured players could be back in contention ahead of the Louth game. The Rackard Cup is a tightly-condensed competition but the manager suggested that the likes of Kenny Feeney could yet play some part in the championship.

“(Kenny) is taking a full part in training with us. You have to earn your jersey, that’s the way it is with us. But he’s back taking a full part in training. He’s coming back from a bad injury. But he played in a club game last night so hopefully he’ll be back sooner rather than later,” he said. “Hopefully everyone will be back; we have two other lads out injured at the moment in Padraig O’Flynn and Calum (Gardiner). The more lads we have fit the more difficult it is to pick the team, so hopefully, they’ll all be back shortly.”