The starting point at the Mall in Castlebar was a hive of activity as limbering runners were joined by punch proud supporters. Former Rose of Tralee Maria Walsh was the MC and her boundless energy and enthusiasm buoyed those taking part.

Over the past decade, some 25,000 participants including 4,000 children have taken part in the landmark charity event. In the process, the Mini-Marathon has raised an incredible €1.5 million for local charities. On Sunday, 1,600 took part in the main 10km event with another 700 kids racing through the streets of Castlebar during the ‘Mini Mini’ event.

“This event has achieved more than we ever hoped it would. This morning is more evidence of that,” said Aidan McNulty, Commercial Manager of the Western People at yesterday’s event. “Some of you are taking part today for your own personal reasons. Some of you are doing it because you are remembering somebody. That’s what this event is about, members of the community coming together to help each other,” he added.

Charlie Lambert, Head of the Mayo Sports Partnership, who co-ordinates the Mini-Marathon, heaped praise on the volunteer effort that enables the event to happen.

“A big thanks to all our volunteers and thanks to the people of Castlebar for coming out and supporting the event,” said Mr Lambert.

He said the Mini-Marathon has acted as a gateway into sport for many women.

“When you get a day like this it’s a big celebration for Castlebar and Mayo. It’s a celebration of women’s participation in sport and physical activity. This event really has made a pathway for a lot of women to get involved in sport,” Mr Lambert commented.

Many runners have taken part in successive Mini-Marathons over the years.

“We do this every year. We do the Pink Ribbon on the Saturday and the Mini Marathon on the Sunday. We wouldn’t miss it for the world,” said Castleconnor woman Edel Gallagher.

Castlebar woman Liz Murphy was back for a seventh time on Sunday. She was running in order to raise funds for the Meals on Wheels Service provided by the Castlebar Social Services Centre.

“It’s a fabulous day. There is much camaraderie between everyone and it’s such an enjoyable event. It’s also a nice opportunity to raise a few bob and help some deserving causes,” said Liz.

Nikita Finnerty from Ballina was part of a large group running in support of a close friend who has been diagnosed with a brain tumour.

“We are here to honour and support her. There are about 120 of us here,” said Nikita, with the group raising funds for Rock Rose House in the process.

Brendan Browne who runs the Coffee Vine in Ballina cut an eye-catching figure in a pink wig and pink lamé jumpsuit. He was running in support of a former employee diagnosed with cancer.

“I borrowed the outfit from my daughter. I didn’t ask her what her inspiration was to have something like this in her wardrobe!” he joked.

“It’s hugely important not only in terms of raising money but also raising awareness,” said the Erris Senator.

The Mini-Marathon was the climax of an action-packed May Bank Holiday weekend. Turlough Park staged the Mayo Day celebrations on Saturday and more than 580 cyclists took part in Saturday’s Mayo Pink Ribbon Cycle.

“It was a really emotional day but a really great day,” said Pink Ribbon organiser Lourda McHugh. Over the past 10 years, the cycle has raised almost €900,000 for breast cancer research. 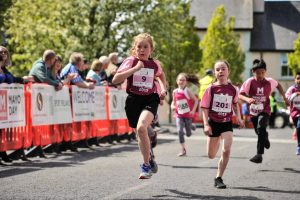 Youngsters make their way around the Mall in Castlebar during the Mini-Mini race. Picture: Tomás Greally