The green and red of Manhattan

It’s doubtful that the regular early-Sunday morning commuters stepping aboard the uptown 1 train at Times Square and 42nd Street had ever been greeted by anything quite like the spectacle that awaited them yesterday morning.

What is usually a quiet subway shuttling night-shift workers home to Harlem or the Bronx instead resembled a particularly boisterous train leaving Ballyhaunis for Hueston on All-Ireland final morning; green and red up and down the carriage as far as the eye could see.

It had been tempting, in the weeks leading up to Mayo’s Connacht championship opener against New York, to wonder whether some of the numbers suggested for travelling fans were a little bit exaggerated. Mayo’s fans might be famed for their dedication to the cause, but surely it was a bit much to expect thousands of them to travel the guts of 5,000km, to one of the most expensive cities in the world, to take in a game that Mayo were always going to win with a bit to spare?

As it turned out, the forecasts were probably selling things short. Mayo supporters were absolutely everywhere in the city from Thursday and Friday onward. Some came with their friends, more came with their families, some came as part of organised tours with their club and a few came solo, just to take in the experience and, who knows, maybe to be able to say in 50 years time that they were there for the very start of the long-awaited victorious championship summer.

At the Banc Bar and Café on 431 3rd Avenue on Thursday night, owner Ronan Conlon from Bonniconlon explained that he had Mayo fans from all around the county and even as far afield as London coming through his doors already, and that footfall was only expected to rise. It took some getting used to, the experience of casually walking down a crowded Manhattan sidewalk and running into a family all bedecked in Mayo jerseys making their way to one of the tourist spots or grabbing a bite to eat. The green and red colours served as their beacon to fellow believers; barely noticed by the vast majority of New Yorkers but standing out a mile against the greys and blacks of the business suits to announce that the crew are in town from Ballina, or Belmullet, or Claremorris, to watch Mayo in action.

The conversations by way of introduction tended to follow along fairly standard lines: where are ye from yourselves? When did ye get in? Where are ye staying? Some amount of Mayo heads about. And finally, in slightly hushed tones at the end of the greeting: how are ye fixed for a ticket?

Practically nobody seemed to have one right up until Saturday evening, and those few that did were usually operating on a promise, the brother of a friend or the cousin of a neighbour who would sort them out outside the ground. Nobody seemed overly concerned though, just happy to be in town and be part of the festivities.

They had no shortage of options. Pubs, bars and restaurants around the five boroughs were all hosting special Mayo-themed nights, hoping to entice the travelling army of supporters through their doors. Some events required serious planning, like the black-tie gala dinner organised by the Mayo International Supporters Foundation on Friday night, pubs like Failte on 2nd Avenue and Shades of Green on East 15th Street were happy to stick a Mayo flag outside the door and welcome whoever walked through the door over the course of the weekend.

Outside the city, in Jersey and Queens and The Bronx and as far up as Yonkers, get-togethers and reunions were being hosted to mark the weekend of the game, which has always held slightly more significance as a social occasion than a sporting one. The refrain from most supporters the weekend was how special it was to see old friends and family after years apart while collectively rallying behind an exciting young Mayo team. 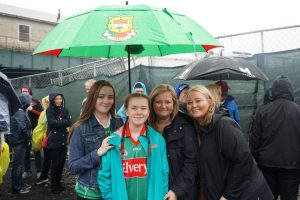