Mayo write their own fairytale of New York

The seats under the modest canopy cover in the centre of the Gaelic Park stand were filled before 9am on Sunday morning, a full five hours before the ball was thrown in for Mayo’s Connacht championship opener against New York.

A combination of the uncertainty over the availability of tickets and the steady rain that fell across the city all morning meant the real diehards among the huge Mayo support were eager to get their spots good and early. The latecomers (ie anyone who arrived less than three hours before the game) had to make do with umbrellas and plastic ponchos to escape the worst of the elements. The crowds really began to congregate around noon, milling around under the marquees at the western end of the ground while the warm-up games between New York GAA development squads and their equivalent US club champions were underway.

Gaelic Park is currently undergoing major renovations and the signs of the ongoing building work were fairly evident to see. Early on Sunday morning the New York stewards were still putting the finishing touches to the makeshift timber stage and doing their admirable best to sweep away the puddles of rainwater that filled the potholes.

To give the organisers their due, the crowd control issues that many had predicted in the build-up the game never really materialised. New York officials were confident from early in the day that they had the capacity to deal with whatever crowd turned out, and while there definitely weren’t any empty spaces in the bleachers come throw-in, neither were there any real problems. The unofficial head-count was somewhere between 6,500 and 7,000 people, a new record for a New York game since they joined the Connacht championship in 1999.

James Horan, in his first championship game in charge of Mayo since the infamous All-Ireland semi-final replay of 2014, handed starting debuts to three players – James McCormack, Matthew Ruane and James Carr. There was no place in the squad for team captain Diarmuid O’Connor, who missed out with a facial injury he picked up in training last week. His place at wing-forward was taken by Evan Regan, while McCormack displaced Donal Vaughan and Colm Boyle was a late switch for Chris Barrett in the three changes from the team which started the National Football League final.

Mayo took on a New York side that featured among their number Matthew Queenan and James Maughan of Lahardane, the former of whom vice-captained the team from wing-back. They also fielded Sligo native Vinny Cadden in goals, while former Roscommon footballer Cathal Compton lined out at midfield.

This was, by common consensus, one of the poorest New York sides in some years and that suspicion was proven brutally true in a first-half in which they simply crumbled in the face of Mayo’s superior speed, power, aggression and technical execution. Mayo had a remarkable 29 shots on goal in the first 35-plus minutes; 16 of them were scored on their way to a 1-15 half-time total, two were saved by Vinnie Cadden, one dropped short and a slightly alarming eleven flew wide.

Aidan O’Shea and Mattie Ruane minced the New York midfield, where the home side were unable to gain any kind of purchase on the breaking balls. Lee Keegan, Paddy Durcan and James McCormack were encouraged to surge forward regularly from the half-back line (all three had their names among the scorers before the break) while the ferocious work-rate among forwards like Evan Regan, James Carr and Jason Doherty was perhaps the most encouraging sign of all.

A full half-hour had passed before New York opened their scoring, when Luke Kelly, the only Exile to really show much of anything, banged the ball over with what was just their third shot of the game. By that stage, Mayo were already 14 points in front and effectively already preparing for a Connacht semi- final.

New York showed some signs of life early on, winning a handful of turnovers and denying space, but the visiting side soon began to make their pedigree known. Regan opened their scoring with a free five minutes in and McCormack notched his first championship score for Mayo to double the lead a minute later.

Durcan swerved over a point to make it 0-3 to 0-0 on nine minutes, though by that stage Mayo had also kicked as many as five wides. The swerving breeze and slippery ball made shooting difficult but some of Mayo’s execution in front of the sticks left lots to be desired all the same.

The points began to fly over as New York’s early resistance vanished completely. Regan popped a free after Carr was pulled off the ball and the Ballina man followed that up with an excellent score from play. Fergal Boland angled over a lovely effort from the right, James Carr marked his debut with a good score, Jason Doherty had his goalbound shot turned over the bar by Vinnie Cadden and Keegan bombed over a point from 54 metres to leave it 0-9 to no score on 18 minutes. They hit double digits when Kevin McLoughlin opted to fist the ball over when he might have gone for goal.

The Knockmore man kicked another point two minutes later, cutting through the New York defence with ease, and points from Regan (a free), Doherty and Boland put Mayo 14 up before Kelly finally got New York on the board on 29 minutes.

Daniel McKenna kicked another nice point for New York but Darren Coen responded in kind for Mayo before Regan darted in for the game’s opening goal on the stroke of half-time. His first shot was well-saved by Cadden but he gathered the rebound and rolled home to leave it 1-15 to 0-2 at half-time.

With the game in the bag, Mayo’s intensity dropped noticeably in the second period. Ciaran Treacy came in to replace Doherty at half-time and make his championship debut and he added energy, kicking a nice point. So too did another debutante, Michael Plunkett, who curled over a beauty after good work from O’Shea.

Robbie Hennelly went up to stroke over a ’45 and Fergal Boland fisted two more points to bring his tally to 0-4 from play. Evan Regan was awarded for an excellent outing, which included a top-score of 1-5, with the man of the match award.

New York added two more points in the second half through Kelly and substitute Kevin Finn but, in truth, this was a bad day at the office for the Exiles. The 20-point full-time margin will obviously be satisfactory from a Mayo perspective but they know there are much bigger battles on the way. Next up for Mayo is a Connacht semi-final on Saturday, May 26, against the winners of next weekend’s clash between Roscommon and Leitrim. 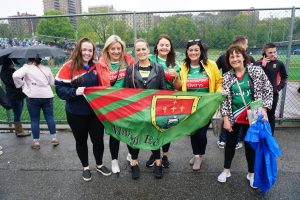 Among the thousands of Mayo fans to travel to Gaelic Park for the championship opener against New York were this contingent from Belmullet, from left: Sarah McHale,
Lynn McGoldrick, Mary Ellen Rowland, Joanne Rowland, Fiona McAndrew and Kiera O’Connor. Picture: Tony Traglia/Brendan Farrell