Roscommon deservedly came away with the two points on offer in last week’s opening round of the Celtic Challenge, the U17 inter-county hurling tournament, which was played in splendid conditions at the immaculate Tooreen GAA Grounds.

The visitors powered out of the blocks in this Group G encounter, and they led 2-5 to 0-1 after fifteen minutes with outstanding individual scores from Eoin Kieran, Adam Donnelly, Darragh O’Sullivan and the livewire Michael Brennan.

The opening goal had arrived after just two minutes with Roscommon full-forward Adam Donnelly blasting to the net after a lovely intricate move and deadly accurate pass from Darragh O’Sullivan. The visitors never looked back and when Eoin Kiernan added a second major after fifteen minutes, the alarm bells were ringing in the Mayo dugout. This time Donnelly turned provider and after turning his marker he set up Kiernan who finished with aplomb.

Mayo, to their credit, finished the first half much stronger with Conal Hession, Mark Gibbons, full-back Danny Hill and the stylist Paddy Dozio all finding scores to narrow the gap to six points. But leading 2-6 to 0-6 at the short whistle, Roscommon still bounced into their dressing-room full of confidence.

The second half produced some blistering hurling with both teams going all out to win early points in this keenly contested competition. Roscommon again started the better with Michael Brennan twice landing remarkable scores from way out on the left wing. Mayo’s Cian Mulchrone, Mark Gibbons and Paddy Dozio responded but the Rossies landed another killer blow eight minutes into the second half when the brilliant Sean Trundle cut through the home side’s defence and sent a piledriver into the corner of the net. Trundle was outstanding for Roscommon from start to finish and deservedly received the Best and Fairest Award for his efforts after the game.

A minute later Eoin Kiernan, the Roscommon centre-forward powered in from the right wing and had the onion bag bursting again pushing the primrose and blue into a 4-8 to 0-8 lead.

Mayo were shell-shocked after the barrage and called for reinforcements from the dugout. Evan Heraty, Oisin Farrell and Kevin Gannon came from the bench to steady the ship, but it was another magical swivel from Adam Donnelly that settled this encounter when he soared into the sky, turned and rifled the sliothar into the Mayo net to give the visitors a commanding 5-09 to 0-9 and still ten minutes to play.

Mayo reeled off 1-3, all coming for the deadly accurate Paddy Dozio in the closing ten minutes, to help narrow the gap, but the Roscommon lads had done enough at this late stage. Dozio was chosen as the Best and Fairest award recipient for Mayo after the game and his never say die attitude in the second half epitomised all that is good about the Celtic Challenge competition. 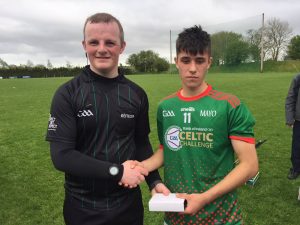