The 38-year-old, who gave birth to a baby girl 10 months ago, breezed home in a time of 37 minutes and 38 seconds, which was three seconds faster than last year’s winner. The Mayo AC athlete was close to a minute and a half ahead of her nearest rival in the 10km race, which is staged in Castlebar each year by Mayo Sports Partnership in association with the Western People.

“I’m in good shape and I was hoping to take the win today. I led from the start and I thought I could run a relatively good time,” said Norah.

This was her third time competing in the Mini-Marathon with Norah finishing second and third in her previous outings.

“It was three times a charm today. I had a little girl 10 and a half months ago so I was watching the race last year. It’s great to win it today,” Norah beamed at the finish line.

Hollymount runner Edel Reilly sped in to take second spot in a time of 39 minutes. Edel, who now lives in Turlough, was competing in the Mini-Marathon for the first time.

“I was kind of hoping I might do well. I was looking back on the times over the last few years and I knew how competitive the field is so I’m absolutely delighted,” she told the Western People.

Isobel Oakes travelled from Ballinamore in Co Leitrim to compete and finished in third place with a time of 39:36. She competed for the first time in the race last year finishing fourth and went one better yesterday.

There were a number of other category winners. Michelle Needham, from Westport AC, finished ninth overall and the 44-year old won the fastest over 40 prize with a time of 42:42.

62-year old Pauline Moran powered over the line in 10th place. The Mayo AC member from Newport completed her run in 43:09 and the best performing athlete over 60. Castlebar’s Angela O’Connor captured the fastest over 50 award finishing 13th overall in a time of 43:46. 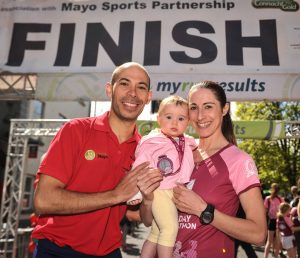