A magical weekend of Mayo celebration

Mayo GAA fans laid siege to New York City over the weekend… and brought the weather with them!

While their native county basked in some of the best May bank holiday sunshine in living memory, thousands of fans attending the first-round Connacht Championship clash with New York in Gaelic Park were treated to a deluge.

It was an extraordinary weekend of Mayo celebration as thousands turned out in Turlough Park in Castlebar for a spectacular Mayo Day event on Saturday, as the Pink Ribbon Cycle also marked its tenth anniversary in Castlebar. Almost 600 people participated, with some cyclists travelling from all over Ireland.

Meanwhile, on Sunday, thousands were at the Mall in Castlebar for the tenth staging of the Western People West of Ireland Women’s Mini-Marathon, which was again blessed with glorious sunshine. The winner was Ballina woman Norah Pieterse who came home in a fantastic time of 37 minutes and 38 seconds. Norah is married to Elmer Pieterse, of Mayo Sports Partnership, which organises the event in conjunction with the Western People.

Some 1,600 took part in yesterday’s mini-marathon with 700 children participating in the mini-mini event, which was part of a real family day at the Mall in Castlebar.

Meanwhile, four Castlebar friends smashed the Guinness World Record for the longest group hug… again! Stephen Rattigan, Brian Cawley, Nicky Kearney, and Robert Tuomey hugged it out on Castlebar’s Market Square for an incredible 30 hours. The marathon cuddle lasted from Saturday until 5pm the following day. Three of the friends took part in the original effort last year in the Welcome Inn Hotel but their record was recently broken by a group from Japan. Determined to claim back their crown, the boys took on another gruelling charity challenge and smashed the record by four hours.

“It was tough. The legs, the body, the muscles, the whole lot aches. But we got through it thanks to the help of the people of the town who really helped us and supported us,” said Stephen Rattigan.

Their efforts have so far raised over €6,000 and counting for Western Care and Pieta House. A fundraising page will remain open for the next couple of weeks — you can donate at idonate.ie/thehug. 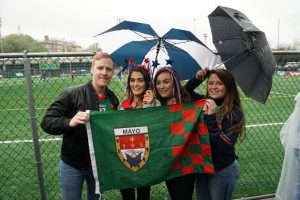