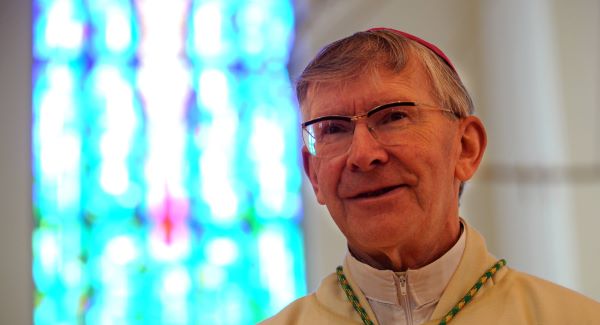 Just hours before pledging support for his successor, the Bishop Emeritus of Cork and Ross was visiting the sick in Cork University Hospital, supporting, among others, a man from West Cork who had lost several fingers in a horrific lawnmower accident.

And while Dr John Buckley said he hopes to continue from time to time his hospital visits to comfort and console patients, he will “move quietly” through the diocese and help his successor where he can after retirement.

But he said he will be very busy over the coming weeks with confirmations across the diocese before his successor, Fr Fintan Gavin, is ordained within four months.

“My plans for the future? To help Bishop Fintan. He will need support and advice in different ways and I will be delighted to help him,” Bishop Buckley said.

But as he approaches his 80th birthday, he said: “There is such a thing as the durability of the human frame. I will move quietly and maybe help out in parishes with whatever ideas Bishop Fintan might have.”

He said he enjoyed serving in one of the country’s largest dioceses – 68 parishes with an estimated 222,000 Catholics.

“One of my greatest joys was the enrichment contact with people brought into my life,” he said.

“People were very supportive and very positive. They carry crosses in life. Our job is to support people as they travel through life.”

But vocations have plummeted with the number of priests in active ministry in the diocese down from around 150 to between 75 and 80 since his ordination, and mass attendances down too.

Priests in parishes are working under considerable constraints as regards personnel because of the decline in vocations.

“I am constantly saying to communities that the responsibility for promoting vocations partly devolves on the community.

“What parish today can be without a priest when the doctor says there is no more I can do.

“In hospitals, I find the first man they will send for, young and old, is the priest.

“That’s our job – to encourage people.

“And yes, there is a decline in church attendance, a pronounced decline, but we are all trying to encourage people in so far as possible. They all have an affiliation to the church.

He recalled how his practice of visiting hospitals began following his appointment as chaplain to Sarsfield Court and how the story of a teenager from Ballingeary, Michael Twomey, who required heart surgery, has stayed with him over the years.

He said he contacted the boy just hours before the operation but that he died later that night during the operation.

“Our job is to support people, in every way, bringing the good news to people,” he said.

Among the highlights of his time in the Diocese was his own ordination as Bishop and his celebration of Jack Lynch’s requiem Mass at the North Cathedral, at the request of the former Taoiseach’s widow, Maureen.

“The way the people turned out that day to celebrate Jack Lynch’s life, the popularity of the man, the love for Jack Lynch, the way his name lives on – that would have been a highlight,” he said.

Georgia and Malaysia to be added to hotel quarantine list