“Plan is to play as well as we can,” says Holmes 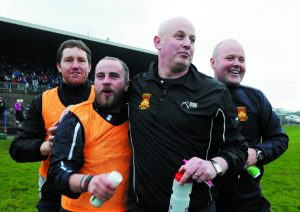 Pat Holmes knows his Castlebar Mitchels side will be up against a formidable outfit in Kerry’s Dr Crokes when the two meet in their All-Ireland Club SFC semi-final on Saturday. But the former Mayo boss says his charges are only focused on their own preparations.

“The plan is to play as well as we possibly can,” he said. “We know they’re very strong, particularly up front, but we believe we have very strong panel of players as well. Our focus really is on ourselves, and on the day, putting in a performance. What we’re looking to do is get through the next two weeks without any injuries, so we have a clean bill of health and a full squad to pick from.”

“The first thing I would say about Colm Cooper is that I think he will probably go down in history as the best Gaelic footballer ever. I genuinely believe that when the history books are written, at this moment in time, he’s just a phenomenal performer. It comes down to everything. For a guy of his physical build, what he can do with a football, the way he win his own ball and bring teammates into it, he’s a phenomenal footballer. But, at the end of the day, he’s only one man. A lot of players will have to handle the ball before he gets it, and it’s up to us to stop that,” he said.